On April 20, 2010, an explosion on the Deepwater Horizon offshore drilling rig set off the largest marine oil spill in history. The blowout killed eleven workers, injured dozens of others, and caused lasting environmental and economic repercussions in the Gulf of Mexico. Nine years later, how has the oil industry and our reliance on fossil fuels changed? How do the stories of those directly affected help us to make sense of climate change and economic inequality?

Developed from hundreds of interviews with survivors of the disaster and the families of those who lost their lives, Leigh Fondakowski’s “SPILL” explores the human stories behind the headlines. Cornell Performing and Media Arts PhD candidate Caitlin Kane directs performances of “SPILL” April 26–May 4 in the Schwartz Center for the Performing Arts’ Flex Theatre.

“At its core, ‘SPILL’ is about the lived experiences of everyday working-class people in the aftermath of the blowout,” says Kane. “While the play addresses climate change and economic injustice—two of the most urgent issues that we face as a nation today—it does so from a deeply human standpoint. It challenges us to think about the lives that are at stake.”

“That’s the power of this work: it invites us to spend a couple of hours collectively grappling with questions that do not have easy answers. ‘SPILL’ confronts us with the interdependence of culture, environment, industry, and government in the Gulf. And the result, I hope, is that we leave the theater with a more nuanced understanding of the complexities that need to be taken into account when addressing climate change and economic disparity. At the same time, I hope audiences leave with a deeper understanding of and empathy for the people whose stories are the heart of this play, and whose perspectives on these issues likely differ from our audiences’.”

Performances are April 26, April 27, May 3, and May 4 at 7:30 p.m., with a matinee on May 4 at 2:00 p.m. in the Schwartz Center’s Flex Theatre. Tickets are $15 for adults and $8 for students, seniors, and the Cornell community at schwartztickets.com or the Schwartz Center box office, 1:00 p.m.–8:00 p.m., Monday–Saturday. The Schwartz Center for the Performing Arts is located at 430 College Avenue in Ithaca 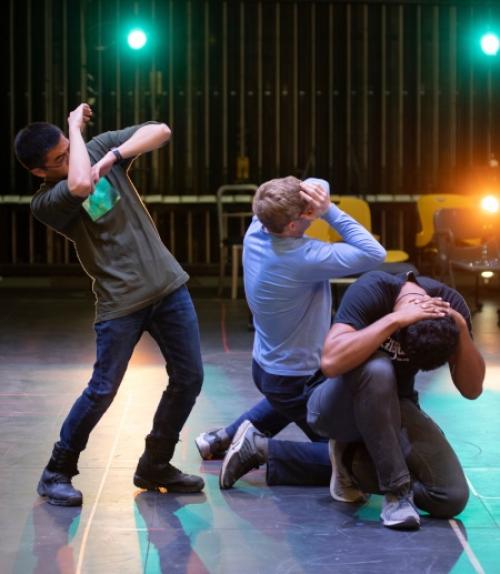