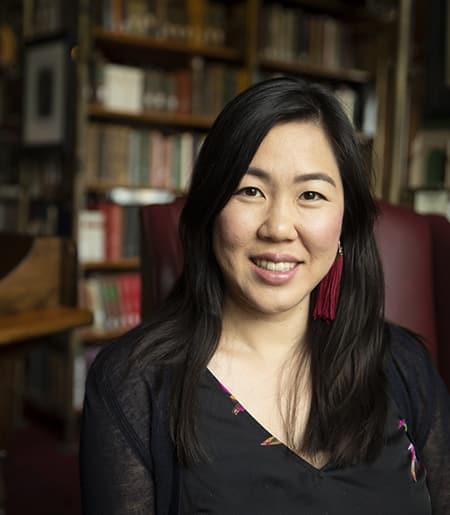 Julia Chang is Assistant Professor of Spanish in the Department of Romance Studies, a member of the core faculty in Feminist, Gender, and Sexuality Studies, and affiliated faculty in the Southeast Asia Program. She holds a PhD in Hispanic Language and Literatures with a Designated Emphasis in Women, Gender, and Sexuality from the University of California, Berkeley. She has also taught at Brown University and San Quentin State Prison with the Prison University Project (currently Mount Tamalpais College). She is a member of the research group TRECE (Taller de raza, etnicidad, y ciudadanía en España at Northwestern University. Her areas of research and teaching include modern and contemporary Spanish literature and culture; feminist and queer theory; medical hygiene; disability studies; race and anti-racist pedagogy; and the nineteenth-century Philippines.

Chang’s first book Blood Novels: Gender, Caste, and Race in Spanish Realism (forthcoming with University Toronto Press) recuperates the cultural and literary significance of blood in late nineteenth-century Spain and in turn, unsettles a dominant assumption of the period—that blood recedes as a meaningful analytic, eclipsed by race and sexuality. Identifying a masculine fascination with women’s bloodlines and bleeding, Chang argues that exemplars of Spanish realist fiction explore blood’s duality (metaphor and matter) as a meditation on the tenets of realism and, perhaps more surprisingly, a theory of gendered subjectivity.

Chang also has two new research projects. The first tentatively titled “Able-Empire” theorizes the concept of utility in relation to masculinity and ableism in the aftermath of Spanish colonial defeat and amid the rise of fascism. The second examines the racialized and gendered contours of Hispano-Filipino relations following the opening of the Suez Canal in 1869, looking at artists and authors including Juan Luna, Graciano Lopéz Jaena, and Emilia Pardo Bazán.

Spectacular Bodies: Racism, Pregnancy, and the Code of Silence in Academe

In Defense of Theory